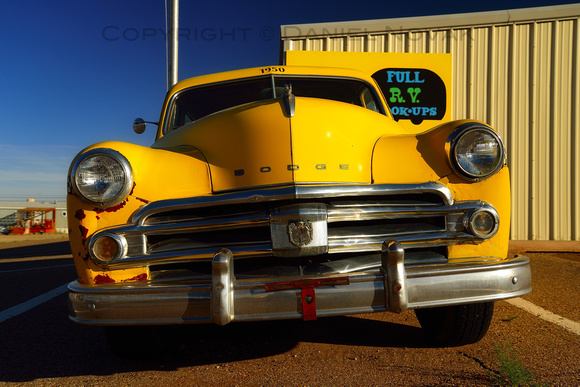 James "Bozo" Cordova's Route 66 Auto Museum at 2866 Rte 66, Santa Rosa, NM and one of the beautiful teasers parked outside.

The numerical designation 66 was assigned to the Chicago-to-Los Angeles route in the summer of 1926. Unlike the Lincoln and the Dixie, Route 66 did not follow a traditional linear course. Its diagonal course linked hundreds of rural communities in Illinois, Missouri, and Kansas to Chicago. The Chicago-to-Los Angeles highway was reported as “continuously paved” in 1938. The Federal Aid Highway Act of 1956 provided a comprehensive financial umbrella to uderwrite the cost of the national interstate and defense highway system. By 1970, nearly all segments of original Route 66 were bypassed by a modern four-lane highway. The outdated, poorly maintained vestiges of U.S. Highway 66 completely succumbed to the interstate system in October 1984 when the final section of the original road was bypassed by Interstate 40 at Williams, Arizona. - Route 66 Federation