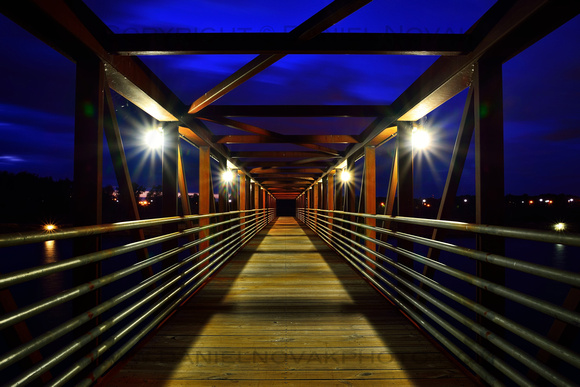 A pedestrian bridge across the Buffalo Union Ship Canal at dusk with the last light of the day, so called blue hour, providing a nice deep blue backdrop to the illumination of the bridge. The symmetry and all lines converging towards the other side of the bridge point out the way. How did we get here, and where are we going next?

The Union Ship Canal, located between Buffalo and Lackawanna, NY, opened in today's form back in 2011 and is one of the recent public areas opened on Buffalo's Outer Harbor. There are hiking and biking trails around that connect to the Outer Harbor path leading all the way to the Buffalo Main Lighthouse. You'll also find fishermen along the shore.

The Hanna Furnace Corp. was first known as the Buffalo & Susquehanna Iron Co., established in 1902, and became a subsidiary of the National Steel Corp. in 1929. The Union Ship Canal was excavated in 1903. The National Steel Corp. closed the plant on January 29, 1982. The City acquired the property through tax foreclosure in 2001, after which the Buffalo Urban Development Corp. undertook brownfield remediation resulting in the development of the Buffalo Lakeside Commerce Park.