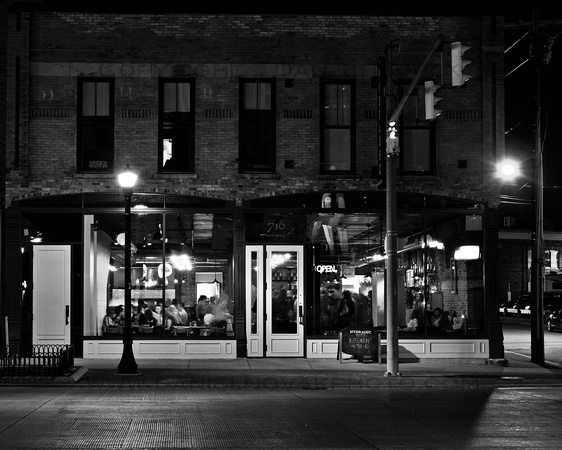 It's rather busy at Hydraulic Hearth in the evening with people flowing in an out almost constantly. This black and white photograph is meant to induce a dose of nostalgia and memories of the Larkin District's early days.

The restaurant offers brick oven pizzas, starters, and in house brews and draws quite significant crowds.

The history goes back to 1827 and the establishment of the Buffalo Hydraulic Association and the construction of Hydraulic canal, thus facilitating the establishment of several mills in the district. In 1876 John D. Larkin began making soap in a small factory on Seneca Street, based on a direct sales business model (manufacturing to end consumer). Lots of retail businesses grew in the area and many of the warehouses are now undergoing restoration. The Larkin Terminal Warehouse was completed in 1912 and acquired by Larkin Development Group in 2002, kicking of a significant redevelopment of the area and adding to the list of successful projects in recent Buffalo history (e.g., the Outer Harbor waterfront development).