A sunny summer day was coming to its end, clouds were floating in the sky, and there were no plans for the evening. Why not quickly hop in the car and catch a sunset over the lake? I did not see and photograph nearly enough of them lately anyway. Cliché you say? So be it. There may be a reason for it.

Support this blog: Do you like my free content but are not ready to buy a photograph yet? Using my links (Amazon) to do your shopping helps me share more photographs and write the stories behind them.

I also had a secondary reason to go out and exercise my photographic muscles. I came into a possession of a wonderful Mamiya RB67 lately and wanted to see how well it worked after sleeping in a box for about 10 years. And there was a reason three. My first slide film development in the new Cinestill Dynamic Chrome D9 developer did not go all that well and I wanted to try it out with something fresher than a film shot a year ago. I know, I was asking for trouble. A new camera, a new developer, and heading out with slide film. But that was exactly what I decided on for the evening. 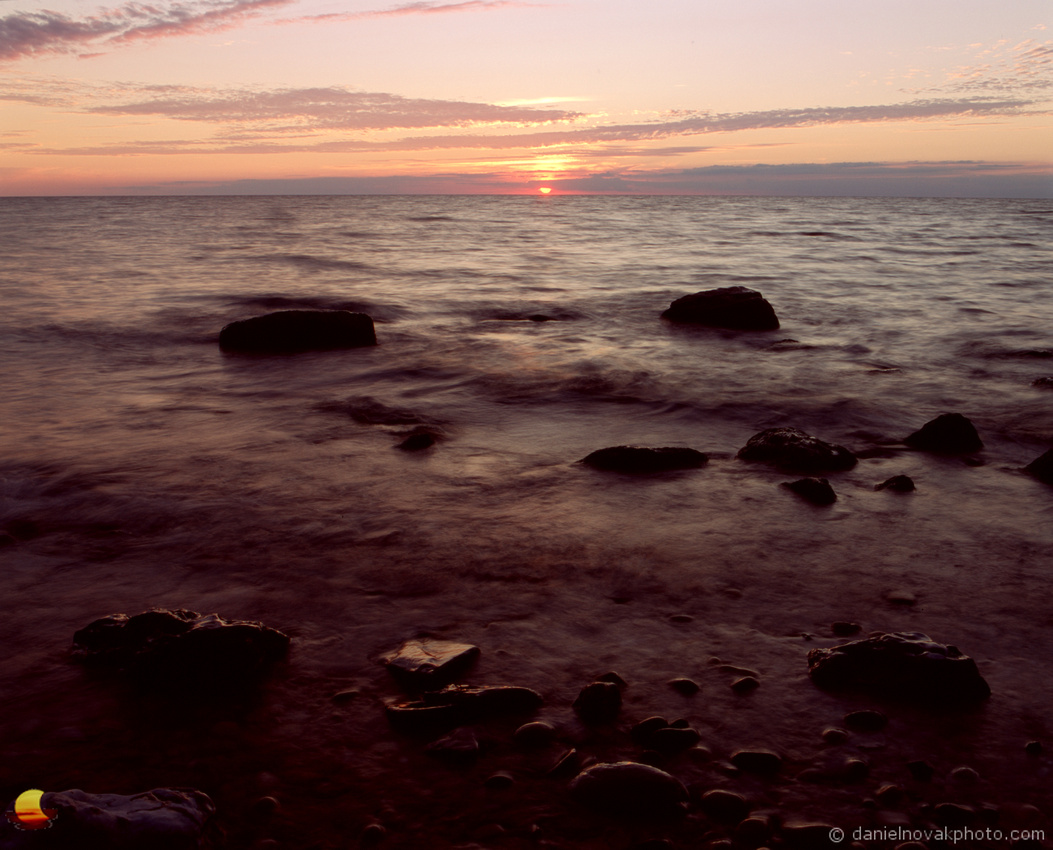 Sunset on the RocksLake Erie Lakeshore

A while back I have posted about the Stages of a Sunrise. And today's post is following a similar scenario just with a sunset. The alternate title could have been Stages of a Sunset but I have decided on Over the Horizon as that is where all of the important action took place. But did it really? Yes, the sun set over the horizon as if dipping into the lake but when I was selecting one of the thre photos here to go into my Buffalo and Western New York Landscape Photo Gallery I went mostly by the foreground rocks. More specifically I selected based on the light falling on the rocks. Thus this one was the subjective winner for me with all of the rocks having a nice rim light being backlit by the last rays of the quickly setting sun. 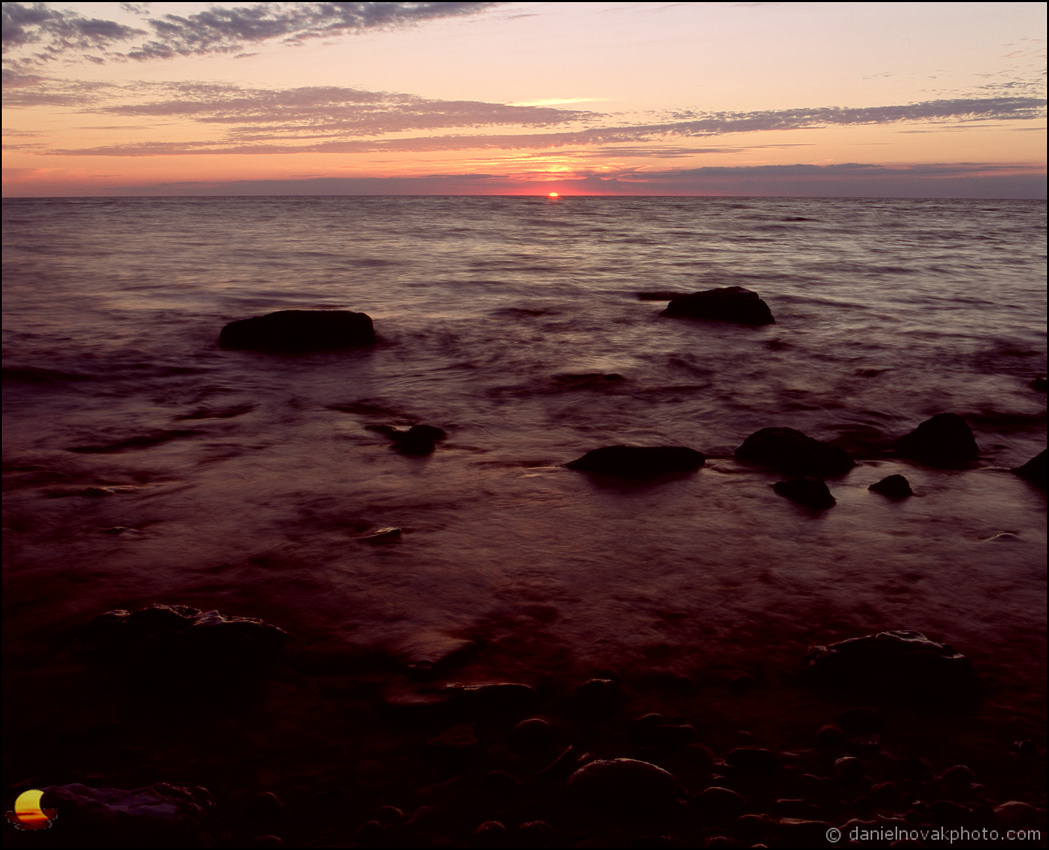 The second photo is just a moment after the first one. It always amazes me how the sun or the moon this close to the horizon speed through the sky. I like the position of the sun even better in that photo as it's already half way behind the horizon. However, the foregound rocks changed dramatically. They still retained a hint of the rim light but that one rock in bottom left completely lost its prominence and I really liked that in the first photo. But yes, it is a personal preference, the darker mood has its merit, however the rock won it for me, at least for now. 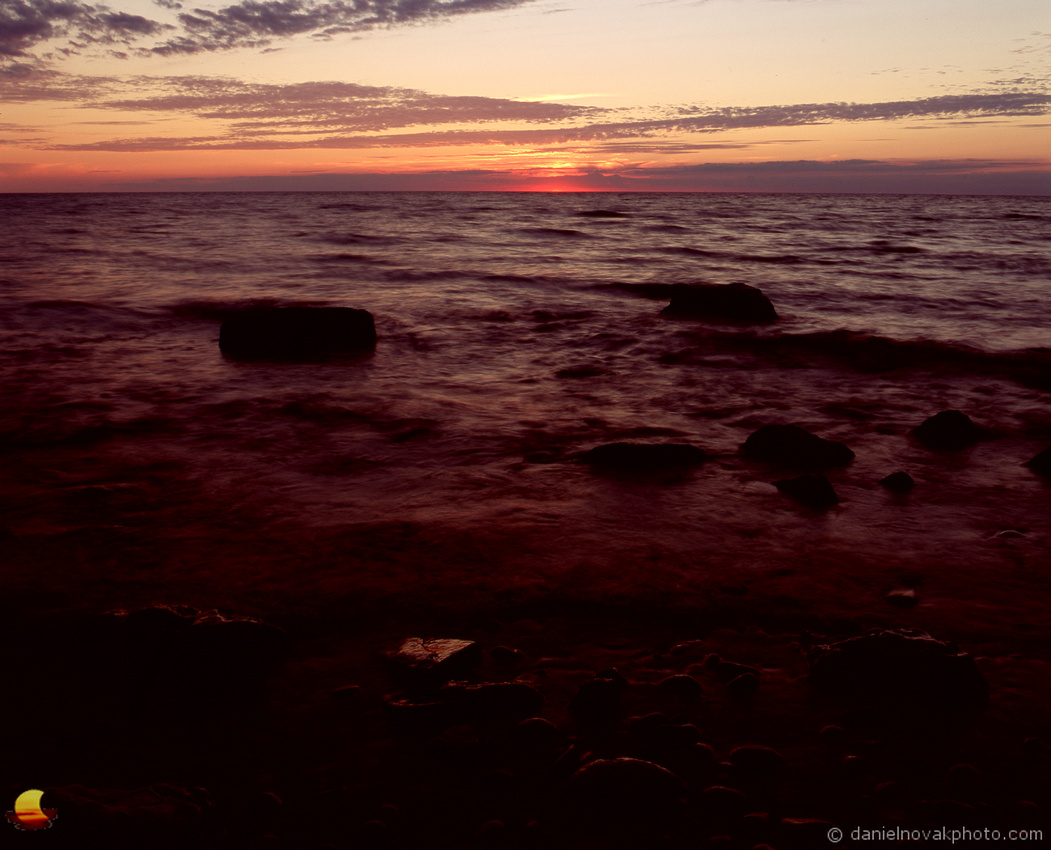 It was not just the sun that worked on the shadow play over the rocks. The gentle waves of the evening were making their contribution too based on how much water spilled over the rocks at the time of the exposure. I was actually trying to get the waves extend as much over the rocks as possible but the sun dictated my timing for the most part. In the end I prefer the photographs taken right after the water receded from the rocks allowing them to shine more.

So what happened with the slide film and the new developer? It all worked out in the end very nicely. I believe I metered better this evening and I made sure the developer temperature was set perfectly. There is still room for improvement but I like what I got. Fuji Velvia is a warm and vivid film. Combine that with the warm tone of the Cinestill Dynamic Chrome D9 developer and you have very warm and vivid result. The above photographs are scanned and presented as close to the slide film as I was able to make them. I only adjusted the black and white points and the overall curve a tiny bit but I did not touch the colors. I was tempted to cool these down a bit but left them alone in the end. That's part of the reason why I am sharing these weeks after scanning them. I wanted to look at them for a while and only decide then.

Do you enjoy reading my photography blog? Would you like to see more photographs from Buffalo and Western New York? Visit my Buffalo Cityscapes and Buffalo & Western New York Landscapes and enjoy! For more travel photography, my Travel Photography gallery offers an interesting mix of places all around. Please, let me know if you have any questions about any photo products offered, or not offered, I will be happy to help! For a quick reference to all photo galleries and collections as well as all photo products currently offered through my site, please, visit the Products page.

Using my links to do your shopping keeps me sharing more photographs and writing the stories behind them (commission earned) and costs you nothing. You can also use the Amazon search box in bottom left for anything at all. I truly appreciate each purchase, no matter how large, no matter how small. Thank you!

Using my links or this search box costs you nothing and keeps me going. Thank you! #CommissionsEarned