This was a late spring exploration of Buffalo's waterfront as it came to life after the annual winter hibernation. And of course, it would not be a proper exploration without a camera in my hand. The choice that day was Pentacon Six, an East German medium format camera loaded with Fomapan 400 black and white negative film.

Support this blog: Do you like my free content but are not ready to buy a photograph yet? Using my links (Amazon) to do your shopping helps me share more photographs and write the stories behind them.

I had wanted a Pentacon Six ever since I returned to film photography back in 2015 and it had been so for purely sentimental reasons. In my childhood, my Dad's primary camera was a black 35mm Pentax. Unfortunately, I have not been able to figure out which exact model as there are apparently no photographs of him with his camera. I think I remember it did not have a bayonet mount but rather was a screw mount but I am not 100% sure neither does that conclusively narrow the model down. Anyway, while that was his primary camera for most of is photographic work, I remember he would always borrow a medium format camera for family portraits. He wanted those to be of better quality. And yes, you guessed it, the camera he was able to borrow was a Pentacon Six. 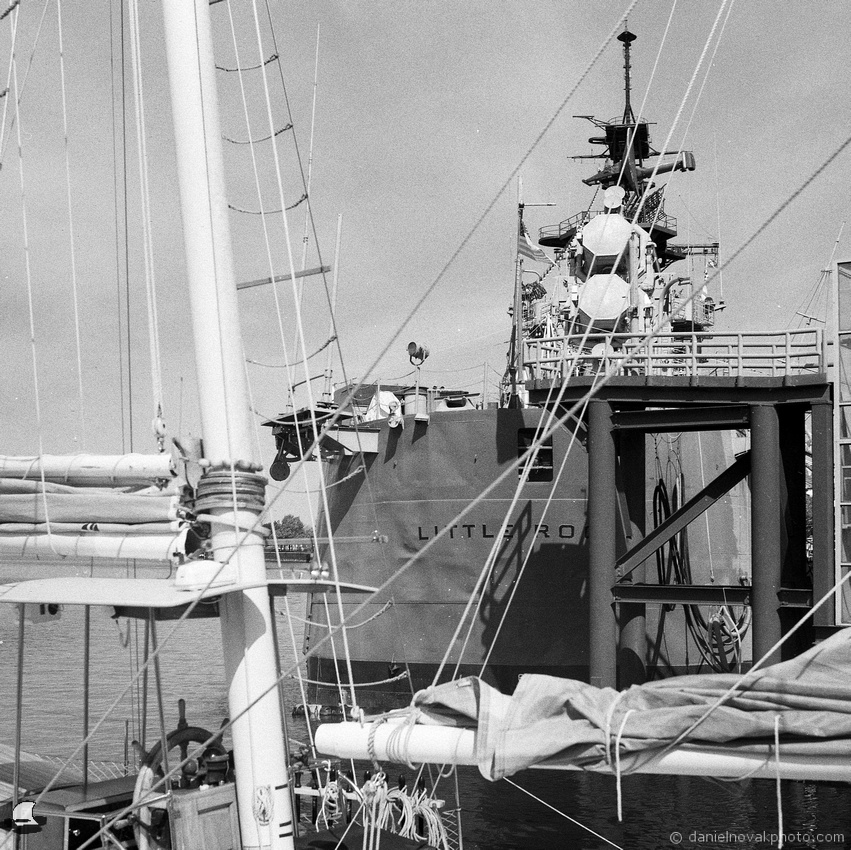 I finally made that purchase happen in late 2020 and am still working on becoming closer buddies with the camera. My first two rolls were in winter months and I learned that the camera does not like Buffalo winters much. Whatever design and lubrication is used for the shutter it does not like frigid temperatures resulting in the shutter moving unevenly across the film plane and creating vertical stripes of different exposure levels.

However, it seems to be just fine when it is warm outside or inside and is relatively small for a medium format camera. It is an SLR, however, I did not get the eye level viewfinder for it yet and use the waist level finder instead, as is more common with TLR cameras. As a result, it offers a rather unique photographic experience. As with TLRs, it creates square images on 120 film at 2¼ x 2¼ inches. In the parts of the world using the metric system, it would be called a 6 x 6 camera as the square is approximately 6 x 6 centimeters. However, unlike TLRs, the Pentacon's viewfinder is not as large as the captured image. Working with that smaller image can be more difficult including achieving sharp focus, however, it allows for an overall image evaluation at a single glance similar to a thumbnail on a computer.

Many dislike the camera for its quirks and low reliability and only time will show where I end up. For now, I know to avoid winter and have had fun with it otherwise. And as you can see in this post, it can definitely capture images. I hope you like them as much as I do. 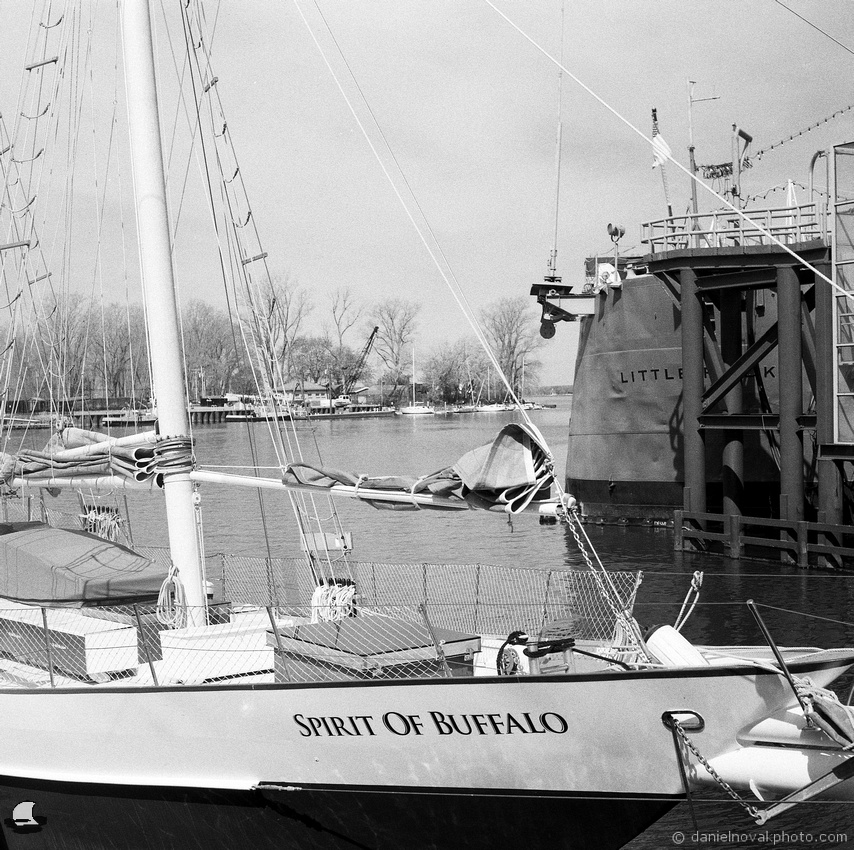 Sailboat and a Cruiser, USS Little Rock CL-92 guided missile cruiser and Spirit of Buffalo sailboat at Canalside, Buffalo, NY
Photographed with a Pentacon Six on Fomapan 400 black and white negative film and developed in D-23

As you can see, my spring outing took me to the inner harbor of Buffalo, NY. I enjoyed a walk from the Erie Basin Marina, through the Naval Park, to Canalside. It was a route I walked many times but there is always something that catches my eye. Sometimes, it is a different take on previously photographed subjects, other times, it is something completely new. Most of my photographs are rectangular and heading our with a camera capturing squares also introduces a new way of looking at and photographing the cityscapes around.

The first two photographs are of the two very different ships I had photographed before. This time they are in square and black and white and I really like the resulting mood. The third and final image is different and one I do not believe I photographed before. The open water and open space was what caught my eye. This was the waterfront! I decided to accentuate the openness by raising the camera upwards and filling most of the frame with the sky. I am a fan of minimalism but do not embrace it as often as I would like to. I did try to simplify this scene as much as I could though given the camera and a single focal length I had available. 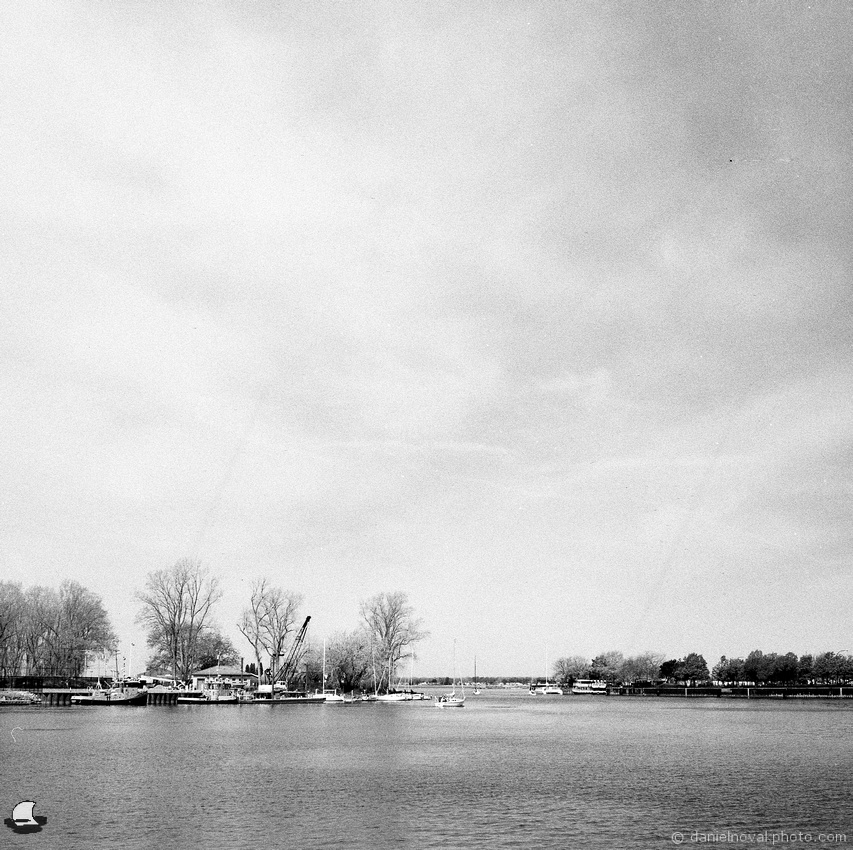 On the WaterCanalside, Buffalo, New York

Sailboat and a Cruiser, USS Little Rock CL-92 guided missile cruiser and Spirit of Buffalo sailboat at Canalside, Buffalo, NY
Photographed with a Pentacon Six on Fomapan 400 black and white negative film and developed in D-23

Is there a camera you have wanted for sentimental reasons? Have you bought it yet?

Do you enjoy reading my photography blog? Would you like to see more photographs from Buffalo and Western New York? Visit my Buffalo Cityscapes and Buffalo & Western New York Landscapes and enjoy! For more travel photography, my Travel Photography gallery offers an interesting mix of places all around. Please, let me know if you have any questions about any photo products offered, or not offered, I will be happy to help! For a quick reference to all photo galleries and collections as well as all photo products currently offered through my site, please, visit the Products page.

Using my links to do your shopping keeps me sharing more photographs and writing the stories behind them (commission earned) and costs you nothing. You can also use the Amazon search box in bottom left for anything at all. I truly appreciate each purchase, no matter how large, no matter how small. Thank you!