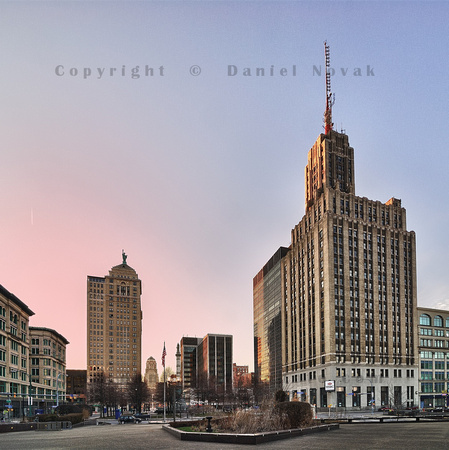 The original target this evening was the Roosevelt Plaza in Buffalo, NY. I wanted tout together something unique that I did not have yet but I guess I set the bar too high, or I just was not ready with the right idea yet. After a little while of trying without much luck I walked couple block south and ended up back on Court Street with the view of the beautiful Buffalo City Hall. Not to repeat myself, I headed further away this time all the way across the Lafayette Square towards the Central Library. And once there, a new idea showed up. Let's put the city hall in the background, way back in the background. Let's show some of the other architectural staples of downtown Buffalo.

Front to back, The Rand Building on the right is the third tallest building in Buffalo, NY (1. One HSBC Center, 2. Buffalo City Hall, ... 4. Main Place Tower, 5. Liberty Building). It was the tallest when built in 1929 at 391 feet and 29 stories. It has the prominent radio transmitter on its roof. Like the City Hall, it's built in the Art Deco style.

The Liberty Building on the left is the fifth tallest building in Buffalo built in 1925 at 333 feet and 23 stories. It has two towers, east and west, each fitted with a Statue of Liberty replica on its roof (only one tower visible here looking from the east).

Buffalo City Hall is the tiny building in the far back just to the right of the Liberty Building. It's the second tallest building in Buffalo built in 1931 at 378 feet and 32 stories.